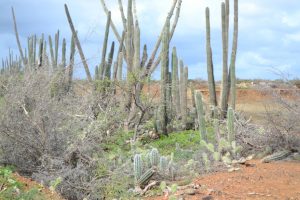 Summary
This master thesis focuses on the socio-cultural formation of the community of Rincon in Bonaire between 1816 and 2010. The main question, which is examined, is why we can still consider this time period as being characterized by creolization. Language is an important element of a culture and when cultural changes in a language develop, it is an important indication that other aspects of a culture have transformed as well. This is part of the process known as creolization. Throughout this research, creolization is considered to be a valuable concept that helps to explain how social and cultural changes affect this process and influences the transformation of a culture. The Dutch Caribbean and Bonaire specifically have had to deal with many influences ranging from Amerindian, European to African. Not much is known of Bonaire’s colonial past, which is why it is so important to research the period before and after the abolition of slavery, and to reflect upon the situation in the twenty-first century; it provides an opportunity to resolve any losses of historical continuity for the Bonaireans. Research shows that the community of Rincon was still dealing with creolization in the period of 1816 to 2010. Out of necessity, the community built its own social institutions, but was at the same time confronted with Dutch colonial institutions. This contrast demonstrates how we as human subjects sometimes overestimate our own ability to cope with transformation. The community of Rincon exemplifies how a creolized culture is indeed capable of mobilizing new cultural elements such as language, religion and cultural heritage, but even a creolized culture remains susceptible to change. The result has an astounding effect on our world, which is increasingly confronted with diminishing boundaries each day.