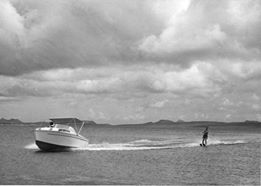 Dankzij mevrouw Ria Heitkönig kreeg de zoektocht een mooi vervolg.
‘My father Heit had a German name, but his grandfather was already naturalized Dutch! Zeebad was the Dutch Guantanamo Bay, since everybody imprisoned there was there without trial. My father wrote lots of letters to the governor to get out, which finally happened long before the war ended when the governor was replaced by a different, less rigid governor. Indeed he loved turtles and made jewelry of the shields that the people who ate the turtles sold to him. He was a friend of the Sanderson family and the Bogarts as well. I remember we would run outside the house and wave to Bogarts sport plane, when he came to Bonaire. Mr. Sanderson often went waterskiing, probably he is on this picture. The boat on the next picture is probably the Zingara, this was the card my father made for Zeebad. I could send you a larger photo so you can check out the people on the boat.’

‘About the Golden Traitor at the bar there are different stories. For sure the marines often tried to steal her and the next boat would bring her back differently painted.
Here a picture of L.D. Gerharts and his son Hugo with her.’ 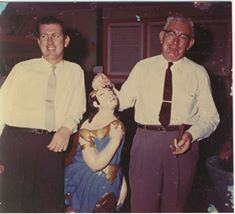 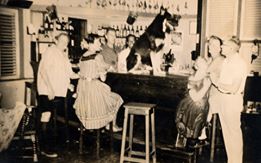 ‘On the bar you see our dog Danny Boy and next to the statue my father. In the bar you find the famous bartender Ibo Domacasse, who also drove the boats.’

Nadat mevrouw Sanderson deze foto’s en teksten had ontvangen was ze blij:
‘This is so wonderful!!! Please thank Mrs. Heitkönig for me and tell her how much I love the photos and her comments! Yes, the sailboat is indeed the Zingara. I am so glad to hear that her father did not kill the turtles (to make his jewelry) but instead bought the shells after someone else had killed them for food. I will not question their reasons from a long time ago.

I hope Mr Heit had a long and happy life after being released from the POW camp – which he never should have been in. I just remember him as being a very nice man when I would go into his shop. I bought a small heart-shaped turtle-shell pin from him that had a gold flamingo on the face of it, but sadly I can’t find it now.’ 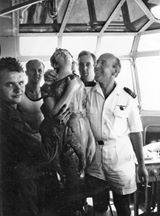 ‘The photos of the Dutch marines reminded me of another wonderful memory I have from Bonaire. One time a Dutch submarine came and docked at the wharf in Kralendijk. The sub had been stationed somewhere in the Philippines (or that area) and my family was invited to attend a dinner on board. I wore a very inappropriate dress with petticoats and high heels which was ridiculous for climbing down the ladder into the submarine and probably gave the sailors an eye-full. While this sub was stationed in the Pacific, they had either learned how to cook curry or had acquired an excellent chef. Anyhow, it was my first experience with true curry cooking and I loved it. I remember that many small bowls of condiments were set out so one could customize their dish to one’s exact tastes. It was a wonderful and unforgettable experience.
Thank you to everyone again.’ 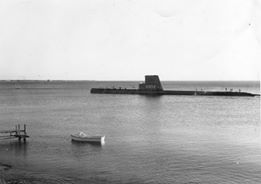 Hai there,
A lot of years ago I met Orlando. We spoke about Hotel Zeebad, and we developed a plan to make a documentary about the history of the Hotel during World War II. But we never succeeded in realising our plans. As a memory I have an original drawing from Rupert van der Linden about Hotel Zeebad and a photo of the entrance of the hotel. 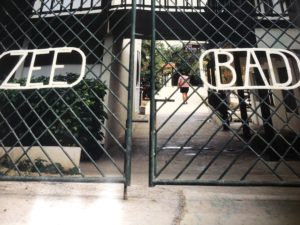 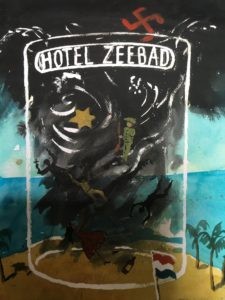