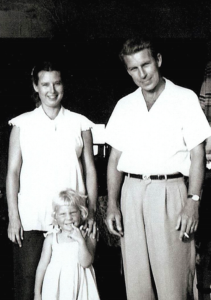 This is my beautiful mother Ruth Sanderson and my handsome stepfather Rick Sanderson and my cute half sister Kim Sanderson. My mother is pregnant with my half brother Rod Sanderson at the time. Rod was born on Curacao on August 8, 1956, so this must be early 1956.

Het begon allemaal anderhalve maand geleden met deze vraag over een stukje getiteld Hotel Zeebad op Ikki’s eiland:
‘Is it possible to see a translation to English for this? My parents ran Hotel Zeebad back in the 1950s.’
Nadat een vertaling van dat stukje naar Arizona was gemaild, kwam een e-mail van mevrouw Bobbie Sanderson waaruit ik graag citeer:
‘If you’re able to point me in the right direction, I would so love to find anyone who may remember when my mother and step-father, Ruth and Rick Sanderson, ran Hotel Zeebad back in the mid/late 1950s. […] 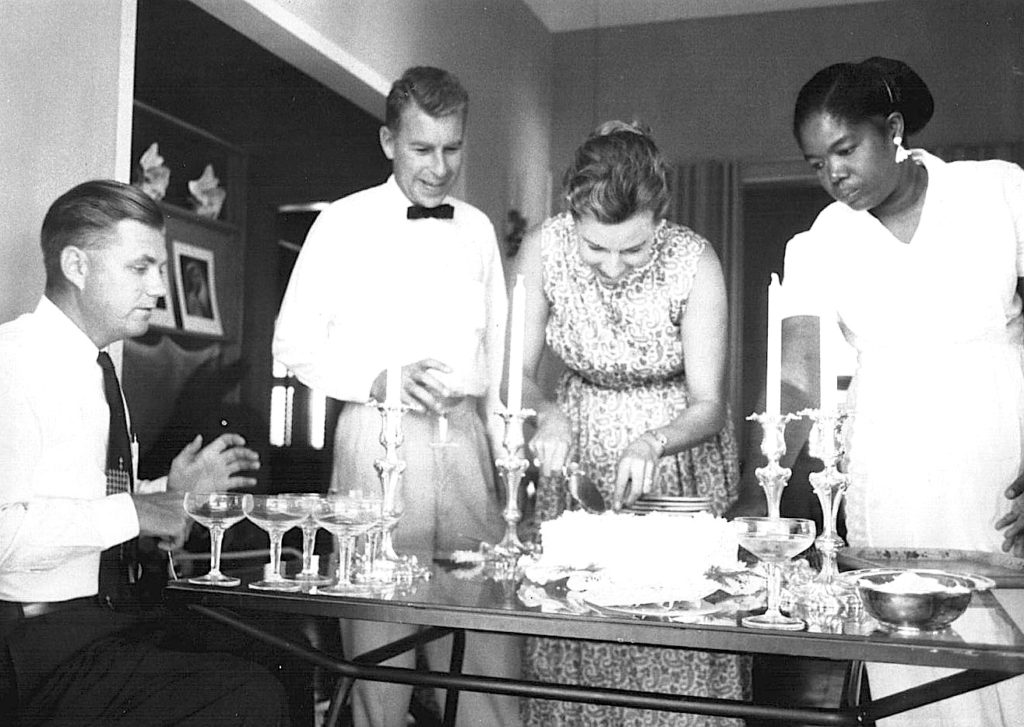 This photo of the then Lt Governor of Bonaire, Van Hesteren, and my mother, Ruth Sanderson, and stepfather, Rick Sanderson, and Ms. Ivey, was taken to celebrate my older sister’s Stephanie’s wedding in the States that they were not able to attend. I’m guessing that the year was 1960 or 1961. So they were still on Bonaire as late as 1960 or 1961. The back of the photo has the words “Photo Heit, Bonaire N.A.” on the back. I think the local photo shop was owned by a man named Heit. My mother wrote on the back of this photo that the Lt. Governor was giving advice on the cutting of the cake.

But I do have wonderful memories of the hotel – especially the little dock we would dive off. My little sister stepped on an octopus under the dock one day and of course me and my friends thought this was a lot of fun. I remember the bar shaped like a ship with the carving of a woman on the front. I remember the day someone dropped a bag of live iguanas on the dining room floor and sent all the guests scurrying. The hotel “rooms” were really just cabins – what the prisoners-of-war were kept in. I remember the boat named Zingara.
[…]I know my parents had a business partner named John Bogart (his wife was Martha) who lived in Venezuela. He was a pilot who unfortunately also drank too much and I remember the story of him forgetting to put the wheels down one day when he landed on Bonaire in his small plane.
[…] I know Princess Beatrix visited Hotel Zeebad (I was away at school) and there was the story of her bathing suit not being zippered all the way up and her maid tactfully coming up behind her and pulling the zipper up.’

Uit een volgende e-mail:
‘I wish I could remember the name of the local man who was the captain of the hotel’s boat, the Zingara. He looked like he definitely had some Carib Indian blood in him. He was very nice and I wish he was still around so I could ask him about things. Maybe his name will come back to me. I am 76 (born in 1942) and he would have to be in at least his 80s now.’ 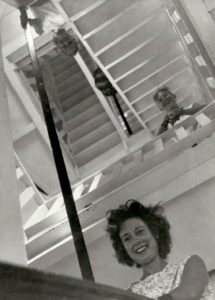 This photo shows my mother, me, and my good friend Missy who was visiting us one summer. Missy is above and behind my mother and I am the one looking down on the top left side. I think Missy and I were 17-18 at the time so that would put the year at 1959-1960.

‘There is only one hotel on Bonaire, and it was once an internment center at the outbreak of World War II. Now known as the Flamingo Beach Club and American-run by Rick Sanderson and his wife, it has a few air-conditioned rooms, and 14 cottages where the accommodations are downright Spartan. But the price, $9.50 with meals, is right, the beach is outside the front door and the fishing is marvelous—trolling for bonito, tuna, wahoo, dolphin, barracuda, sail and king, bottom-fishing for red snapper. On hand for hire is a 40-foot ketch, an 18-foot Chris-Craft and a glass-bottom boat. Water skiers can skim the top of the Caraibische Zee, and skin-divers can probe beneath it. Inert in a sling chair on the awning-covered terrace there are those who will merely watch it, distracted only now and then by the sight of an occasional sail-fitted tub of a fisherman gliding home with a load of garfish, or by the cackle of a wild parrot, the bray of an orphaned mule, all of it far, far from the hubbub, the hurly-burly and The Hague.’

‘It was a one hundred percent Dutch establishment, Staffed by locals. All the clientele were Dutch, and several Dutch men, a Dutch lady, and finally a young American had previously managed it with his extremely beautiful wife. His term of employment ended when he had been beaten up by a bunch of drunken Venezuelans one New Year’s Eve. Something about a firecracker, I understand. Had I known the story earlier, you can be sure that I would never have attempted to fill his slot. I think Bogart was desperate or simply admired my ship, or perhaps thought me somehow able to attract tourists just because I captained an ocean going sailing schooner.’

Waarop dit antwoord kwam van mevrouw Sanderson, een antwoord waaruit blijkt dat de faam van Ikki [#31] wereldwijd dreigt te worden:
‘This is intriguing but leaves a lot of questions. Is the lady in 2006 saying that my stepfather Rick Sanderson was beaten up by a bunch of Venezuelans? That doesn’t make sense to me as being the reason why my parents left Bonaire. But this is not your problem and mystery to solve.
But I would still love to know what Ikki may know about my mom/stepfather and Charlie with the Zingara.’

‘I think his name was Charlie and my younger sister remembers her father (my step-father) mentioning a Charlie when talking about Bonaire later in life. My sister Kim was a very young child when they left Bonaire.
Anyhow, if Charlie Is still alive and around, he would probably know why my parents left Bonaire.’

‘I remember the name Hugo Gerharts. I wonder if he was the German man who had the shop where he made jewelry from turtle shells. I didn’t think he had any financial connections to Hotel Zeebad when my parents were there. My stepfather’s business partner was John Bogart. ‘ 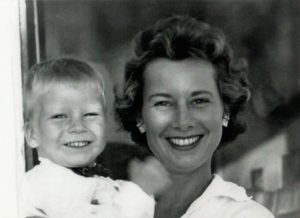 My mother, Ruth Sanderson, and my half-brother Rod who was born on Curacao in 1956 so I’m guessing he might be 2 years old in the photo – so the photo was taken in maybe 1958?

Uit een andere e-mail:
‘My half-brother was born on Curacao in 1956. My mother and step-father left Bonaire under cloudy circumstances in the late 1950s (I guess). I know they had conflicts with the local authorities on Bonaire over taxes that were specially created just for them, but I really don’t know what caused my parents to leave and they were reluctant to talk about it. They moved to St. Thomas and then St. Croix where my mom died in 1974. My step-father died in South Carolina in 2003.

I keep remembering more and more things. I remember a German man who was a jeweler who made things out of turtle shell. I am horrified now that I bought a turtle shell pin from him but in those days we all thought that animals were there for our use and had no thoughts of being humane or conserving. But now I am fascinated to think that he was possibly one of the German POWs that were kept at the place that became Hotel Zeebad.’ 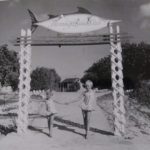 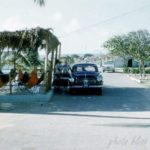 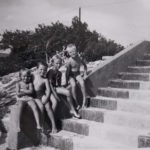 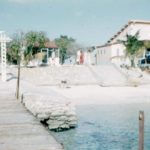